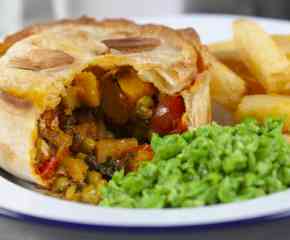 No ordinary pie, this vegan + gluten-free recipe by So Veganstars our Rogan Josh curry sauce, bringing an extra kick to your Friday night dinner.

1. Heat the coconut oil in a large pan on a medium heat. While the pan heats up, peel + discard the skin of the onion, slice it thinly + add it to the pan. Fry for 10 minutes, stirring frequently until it begins to caramelise.

4. Next, roughly chop the coriander leaves + stir them into the pan along with the juice from the half of lime + season to taste with salt + pepper.

6. Meanwhile, roll out the pastry on a floured surface until it’s a few millimetres thick. Use a sharp knife to cut 4 circles a few cms wider than the pie tins (make sure you leave enough pastry for the tops), then line the pie tins with the pastry by pressing the pastry into the base + sides to ensure the inside of the tin is fully covered. Sprinkle a tsp of flour over the base to stop it going soggy, then fill each pie with the curry filling.

7. Use the remaining pastry to cover each pie + pinch the top + sides of the pastry together to close the pie.

8. Brush the tops with plant milk + bake in the oven for 20-25 minutes, until golden brown.

9. We love to serve our pies with homemade chips + mushy peas. Enjoy!