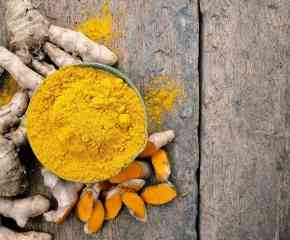 This gorgeous golden yellow root has been used in India for thousands of years as a spice and medicinal herb. It brings a distinctive yellow colour to curries, as well as to your hands if you’re preparing it fresh! Recent research has been supporting its many benefits, which appear to be due to the various compounds within Turmeric known as curcuminoids.

The most important of these compounds is curcumin, which is known for its powerful anti-inflammatory and antioxidant properties. Consuming more turmeric and particularly curcumin may therefore be helpful in reducing the risk of certain health conditions – for example it has been shown to be beneficial for the heart and brain, lowering inflammation and reducing joint pain.

As curcumin is poorly absorbed into the bloodstream on its own, it’s best consumed with a little black pepper and some healthy fats which can enhance its absorption. Try it in a vegan Turmeric Latte, or our delicious Summer Pea, Coconut + Turmeric Soup.