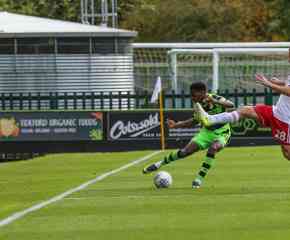 This year, we’ve been delighted to partner with Forest Green Rovers, the UK’s most pioneering + ethical football club. From an organic pitch to a solar-powered mower, they’ve got it all. Oh, did we mention they’re vegan too? We spoke to CEO Helen Taylor to find out more.

Can you tell us a little about why Forest Green Rovers became vegan?

It all started when we got involved with Ecotricity, who’ve supported Forest Green Rovers since 2010. Dale, the founder of Ecotricity, is a passionate football fan and in the same year became chairman of the club. It just made sense to start to align our ethos with Ecotricity, and the first step was removing red meat from the menu at the grounds. For an 128 year old football club that was quite a change! But we gradually introduced more vegan options, and saw people adapt. Two years ago we made the full switch, and now all the food served at the club - and to the players when they’re training or playing - is vegan.

And how has that been received?

The players have seen great results. Most are eating less meat than they did, and a couple are even moving towards a fully vegan diet. Plus the combination of getting promoted into League Two, and becoming a vegan club, has really captured the attention of the media. Now we’ve got fans in corners of the world we would have never expected, from Norway to China and Australia! We’re so glad to be making these changes at such a positive time for veganism. At away matches it’s always a big topic of conversation in the boardroom too.

What about the fans, and your board members?

Everyone has adjusted really quickly - and they love the food we serve. In fact, sales have even increased, and a few fans have even told Dale they’re changing their diets at home. We have had a few chants from the away fans of ‘Where’s your burger van?’…But we also had our Vice President, Allen Grant, having a TV interview and - completely of his own accord - talking about the environmental impact of eating meat and the benefits of going vegan.

And the biggest challenges?

Being able to provide enough food for everyone - we need to buy new ovens! For home games we’re now looking at between 1,800 and up to 3,000 visitors. Match day experience is key, and food’s a really big part of that.

What’s next for FGR?

This season, we’re hoping to do well in League Two, to continue to share the Forest Green Rovers story. We have education programmes, teaching children about the environment, and the food we produce on match days. Plus we have a few clubs very interested in our robotic, solar-powered mower…