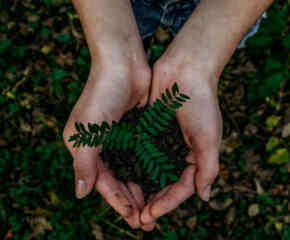 ORGANIC FOR THE PLANET

Organic September – a month long campaign hosted by The Soil Association that celebrates our amazing organic food, farmers and producers within the UK. We were proud to be a part of this incredible movement last month, but even with September at a close, we want to show you how eating healthy organic plant-based food could not only benefit you, but also our planet.

But why we hear you say, what’s so special about this organic malarkey?

Creating nourishing food with organic ingredients has always been the Tideford way, making delicious homemade-style soups and sauces in our Devon kitchen for over 20 years now. Being organic is important to us, not just because of its benefits to the environment, but we think it tastes better too!

It’s about knowing what’s in your food

They say you are what you eat, right? So what about when you can’t be 100% sure of what you are eating?

We don't know about you but here at Tideford we like to know what's in our food, and that means eating more of the good stuff and less of the nasties. Many pesticides remain in some of the food we eat, despite washing and cooking!

It’s better for the planet

Perhaps one of the most important reasons for why we are organic. Organic farms release less greenhouse gases per hectare than non-organic farms, helping to combat climate change.

So it’s a no brainer – the more people buying organic, the larger the demand and the more organic farms. But if only it was that simple! We recognise that buying organic food can be a little heftier on your wallet so we’ve come up with a few top tips to help you get started:

The environment has always been at the heart of everything Tideford does. That is why we have always been a dedicated organic company, and why three years ago we made the switch to vegan. With increasing evidence that making the change to organic has a positive impact on our health and a significant benefit to our planet it seems more important than ever to #chooseorganic.

All information correct as of September 2019 and taken from The Soil Association.