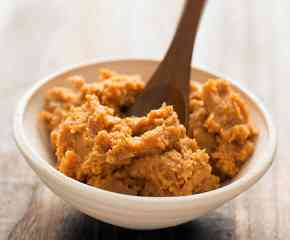 How to make the most of your Fresh Miso

Just a spoonful of miso here + there can make a massive difference to your cooking. It brings soups, sauces, salad dressings and marinades to life. And it's good for you!

But until recently, miso (a tasty paste made from fermented soya beans) was a bit of an alien ingredient for many. A traditional, popular seasoning in Japan, it's been rescuing recipes for thousands of years, and so we've decided to bring a fresh, handily potted version to the UK market.

So how do you use miso paste? And does it keep?

It's a simple equation: 1tsp miso = 1 stock cube. Think of miso as a healthier alternative to stock cubes – and use it in the same way. Where you might use stock, pop in a teaspoon of miso.

Our misos are all fresh, so they need to be kept chilled. But the good news is, they last in the fridge for 6 weeks after they’ve been opened – plenty of time to make the most of your pot.

Looking to get more miso into your cooking? Try it instead of: