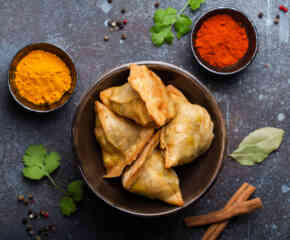 Our decorative canapés are just the treat for entertaining your guests this December. They’re super simple to make and require minimal effort so you can spend more time entertaining and less time in the kitchen this Christmas.

To make the pastry

To make the samosas

Tip: If you are short of time, use readymade vegan filo pastry brushed with melted plant-based spread and oven bake until crisp instead of deep frying.